Meet the ‘Triple J crew’ - Jade, Jacqui and Jodie who are making a sustainable future possible as part of our team in Northern NSW.

"Working with a wide range of people has also given me an understanding and appreciation for the important roles that we all play – without each other, the cogs stop turning"

"Working with a wide range of people has also given me an understanding and appreciation for the important roles that we all play – without each other, the cogs stop turning"

The teams across the New England regions are strongly involved in their communities through education initiatives and community events. They have recently represented the community through truck artwork school competitions in collaboration with the Narrabri, Moree and Gwydir Shires, with the winning artworks displayed proudly on the sides of Cleanaway recycling trucks. The Tamworth and Moree were also the first to feature an adapted version of the My Country My Community artwork by artist Edikan.

We spoke to Jade, Jacqui and Jodie – also known by their nickname ‘the Triple J crew’ – about their experiences in leadership roles at Cleanaway, the challenges they have faced, and some of their proudest achievements. 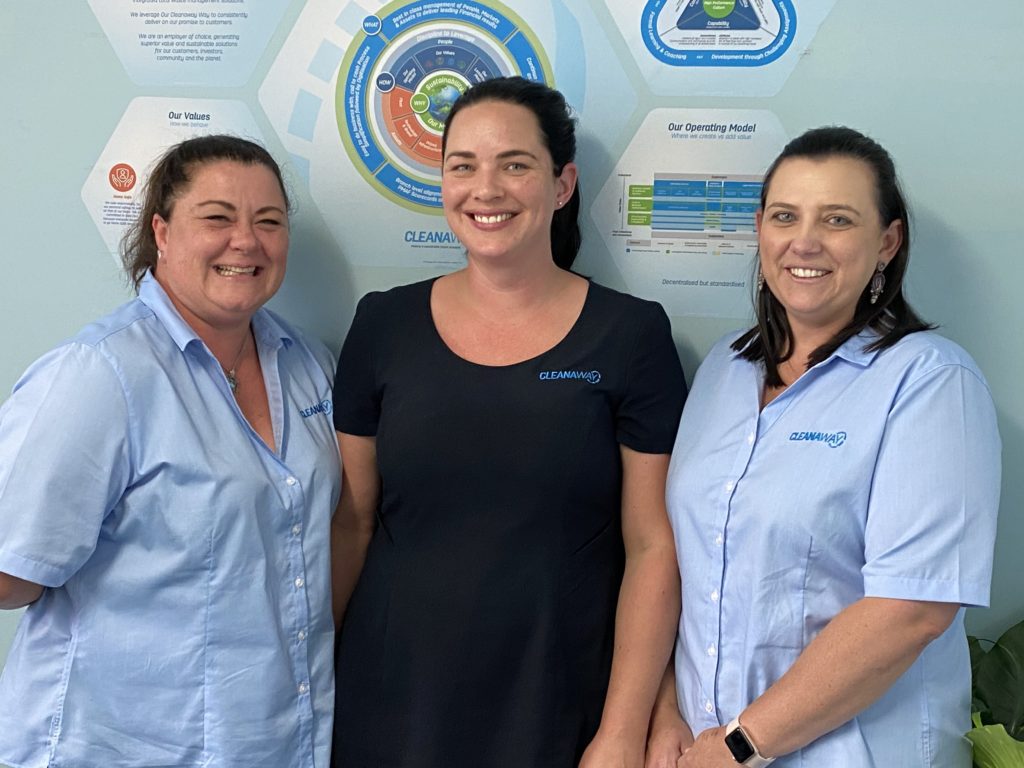 Jade Maric, Area Manager for New England, is based at the Tamworth site and is responsible for 50 staff, 60 vehicles and four depots. Cleanaway in the New England area holds seven municipal contracts, as well as container deposit scheme (CDS) services.

Coming from a background in the construction and mining industries, Jade joined Cleanaway at Newman in WA seven years ago and has been in Tamworth for the past four years. “It’s been a remarkable journey. The opportunities I have been afforded have been incredible, and I have been promoted three times in four years”, said Jade.

In her time with Cleanaway, Jade has been involved with many projects, including several tenders, the roll out of the CDS, and the challenge of finding ways to continue servicing customers when Cleanaway’s fleet was temporarily grounded. “I’ve learned an incredible amount, especially managing through drought, bushfires and COVID over the past 12 months”, she said.

Jade described how looking after the mental health of her staff has been one of the challenges during the past year and says that the key is to stay in regular contact with them. “Increased interaction and maintaining a heightened awareness of changes in behaviour is important, as well as improved access to employee assistance programs”, Jade explained.

Working closely with her team is something that’s important to Jade at all times. “My proudest moments at Cleanaway are always in celebrating the successes of my team”, said Jade. “Whether it’s a collective contract win or an individual being recognised by through a promotion, invitation onto a national committee, or awards and rewards, seeing my people succeed gives me immense pride and appreciation for the opportunities that working for Cleanaway presents us.”

“We were recently awarded a seven-year collections contract with Tamworth Regional Council, commencing on 1 July 2021. Although Cleanaway is the incumbent provider, this contract will include new fleet and bins and I’m so excited to work with the team to launch the new contract.”

Jacqui Norrie is Operations Manager at Moree, where she is responsible for 15 employees and 13 trucks, as well as overseeing the Moree Plains, Narrabri and Gwydir Shire contracts. Site operations also include operating front lift trucks for business collections in Moree and Narrabri, emptying reverse vending machines (RVMs) as part of the CDS, and operating an organics facility that supplies compost to the shires.

Coming to Cleanaway around 14 months ago from an operations manager role at an agricultural dealership, Jacqui has enjoyed learning about the waste industry and being part of Cleanaway’s mission to make a sustainable future possible. “I find it challenging, but very rewarding”, Jacqui said of her role at Cleanaway. “I was very excited and proud to have recently won the Continuous Improvement award in the Star Awards, as well as being nominated for the NSW Best in Class – We Make A Difference award”.

As well as her operational responsibilities, Jacqui coordinates Cleanaway’s education initiatives in the regions and focuses on engagement in the local communities. “We’re involved with schools and community events, such as markets, to promote an understanding of resource recovery and encourage better recycling habits”, Jacqui explained. “Cleanaway also supports local businesses, sourcing as much as possible from local suppliers and using local services such as electricians and repairers”.

Cleanaway trucks from Jacqui’s site were recently decked out in artwork created by students from across the Moree Plains, Narrabri and Gwydir Shires. The three councils ran a truck art competition based on the theme ‘Be green, keep your recycling clean’, and the winning artworks were selected by Jacqui and local councillors.

Jodie Collins joined Cleanaway in September 2019 as part of the Customer Service team, followed by a role overseeing fleet maintenance and health & safety requirements for the Tamworth and Armidale depots.

“When an opportunity to progress to operations manager came about, I transitioned to that role only 12 months after commencing with Cleanaway”, said Jodie. “I enjoy the diversity of this role and the day-to-day challenges it brings. No day is the same and there is never a dull moment. I have an amazing group of people working with me who have been so incredibly supportive of my transition to operations manager.”

Jodie’s previous experience in the heavy vehicle industry has been valuable in her role at Cleanaway. “It has given me more confidence to engage with internal and external people when it comes to maintaining our fleet”, she explained. “I have also been able to adapt quickly to our health & safety requirements, coming from a similarly rigorous safety culture. Working with a wide range of people has also given me an understanding and appreciation for the important roles that we all play – without each other, the cogs stop turning”.

Jodie is looking forward to assisting with the commencement of the new Tamworth Regional Council contract and the new fleet. “I commenced as operations manager towards the end of the current contract and the older vehicles have presented some challenges. It will be lovely for our operators to be driving new and improved vehicles”, said Jodie.

“I am proud that Cleanaway has recognised my skills and commitment and given me the opportunity to improve my career. I have met some fabulous people and I love my Cleanaway family”, Jodie highlighted.

Contact us to learn more about how we’re making a sustainable future possible for communities across Australia.

Changing perceptions of ‘garbos’ to create a more diverse workforce