Changing perceptions of ‘garbos’ to create a more diverse workforce

“If little girls see a woman driving past in a garbage truck, it breaks down some of those gender stereotype barriers.”

“If little girls see a woman driving past in a garbage truck, it breaks down some of those gender stereotype barriers.”

Finding more women to become ‘garbos’ is even tougher but that is the challenge that Gary Flaxman is tackling with enthusiasm.

The Municipal Contractor Manager at Cleanaway’s Hillsdale depot in Sydney and member of the Diversity and Inclusion (D&I) Working Group has become a champion for gender diversity, trying to convince more women to enter a traditionally male-dominated world.

This in turn reflects Cleanaway’s strong focus on achieving its sustainable development goal of gender equality and empowering women and girls.

“I’m not out to change the world. I do what’s best for our depot,” says Gary, who manages about 80 employees who service the City of Sydney Municipal Waste and Recycling contract.

He estimates he has hired 100+ drivers during his 20 years in the waste and logistics industries, almost entirely male.

“It’s a very male-dominated industry with a very blokey culture but I believe we need an equal balance of males and females, as much as possible,” he says.

“If you have the ability to do a role, you should be given the chance.” 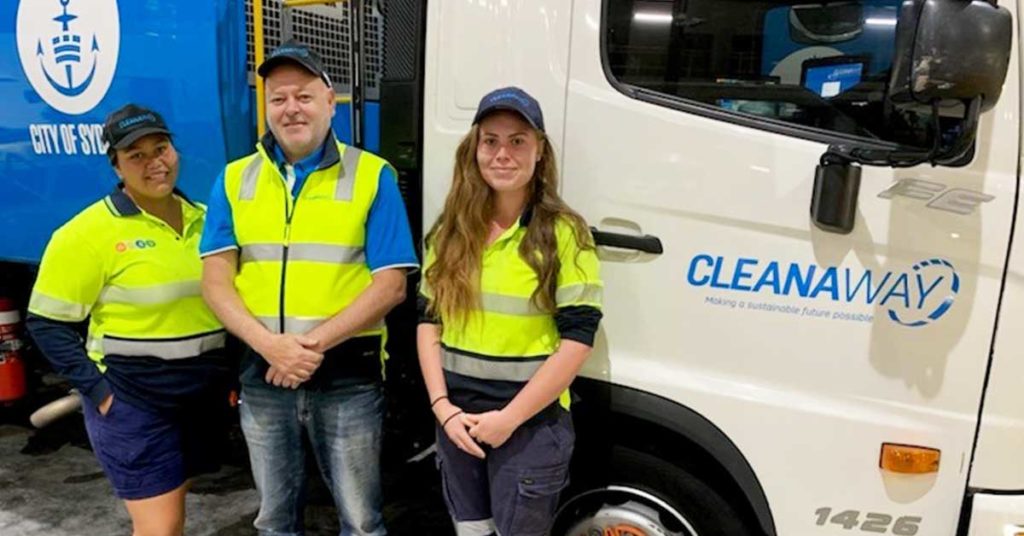 His focus on gender diversity sharpened about three years ago when he worked with an ‘exceptional’ female driver at another depot.

“She was one of the stand-out performers and, when I saw the amount of work she got through, I decided to find more female drivers,” Gary says.

“When she left I recruited another woman who started as a ‘runner’ pulling bins and has graduated to become a side-arm driver operating a vehicle alone.

“I’m proud of what we have been achieving, especially when it’s tough to attract women.”

Although only a small proportion of drivers Gary has recruited are women, this reflects the difficulty in attracting them to a job that can start as early as 4am, last for up to 12 hours, can involve physical work, and can be a bit ‘stinky’.’

But it is also well paid, particularly compared to other roles that similar candidates would typically apply for, and involves a high level of autonomy and responsibility.

Drivers are in charge of vehicles costing about $350,000 which sometimes have to be driven down narrow alleys so common in inner Sydney, picking up hundreds of bins each day.

“It’s a very demanding contract from a driver’s point of view but experience in the mining industry shows women have high concentration levels when driving trucks and cause less wear and tear on them,” he says.

“The perception is that the job is not for everyone, but I think anyone can do it, it’s just a matter of whether they want to.”

“You have to be confident, fit and willing to stay in the industry for a while. When women leave these roles it’s not because they don’t enjoy it, but rather it’s for family reasons.”

“There are two ‘blue collar’ women at my depot and we’re trying to slowly bring in more. We’ve put a lot of effort into training them if they have no previous experience because I want to see them succeed.”

“Seeing women driving garbage trucks improves the perceptions of what a garbo is, and shows that it’s not a boys club. If little girls see a woman driving past in a garbage truck, it breaks down some of those gender stereotype barriers.”

Cleanaway had 5.7 percent of females in operations in FY20 and has a target of 6.5% for this financial year.

Valuing and supporting diversity and inclusion is a critical part of Cleanaway’s ‘Stronger Together’ value.

As Australia’s leading total waste management solutions provider, the company is committed to upholding global standards of sustainability – for employees, the community, the environment, and economic stakeholders.

As Gary says: “Ultimately a diverse workforce is a more sustainable workforce.”

Learn more about the amazing people who make up our diverse and talented workforce.