Meet Tymekqwa Duckett, our driver who is carrying on a family tradition of working with Cleanaway while breaking new ground for gender equality in the waste industry

A childhood of hearing from relatives who worked in the waste industry was enough to convince Tymekqwa Duckett she wanted to become a ‘garbo’.

When the opportunity to join Cleanaway as a ‘runner’ came up, she grabbed it, like a football, in fact! The Sydney teenager is an emerging rugby league player with the Sydney Roosters who has been juggling new job with training commitments and, as time allows, a social life.

“I was looking for a job after leaving high school last year and doing a cleaning job for a few weeks. My dad said ‘there’s a position coming up and they’re looking for a girl’. I’ve been doing it for about three months and I love it,” says Tymekqwa.

Her father John also works as a runner at Cleanaway, continuing a family tradition that dates back to her grandfather. 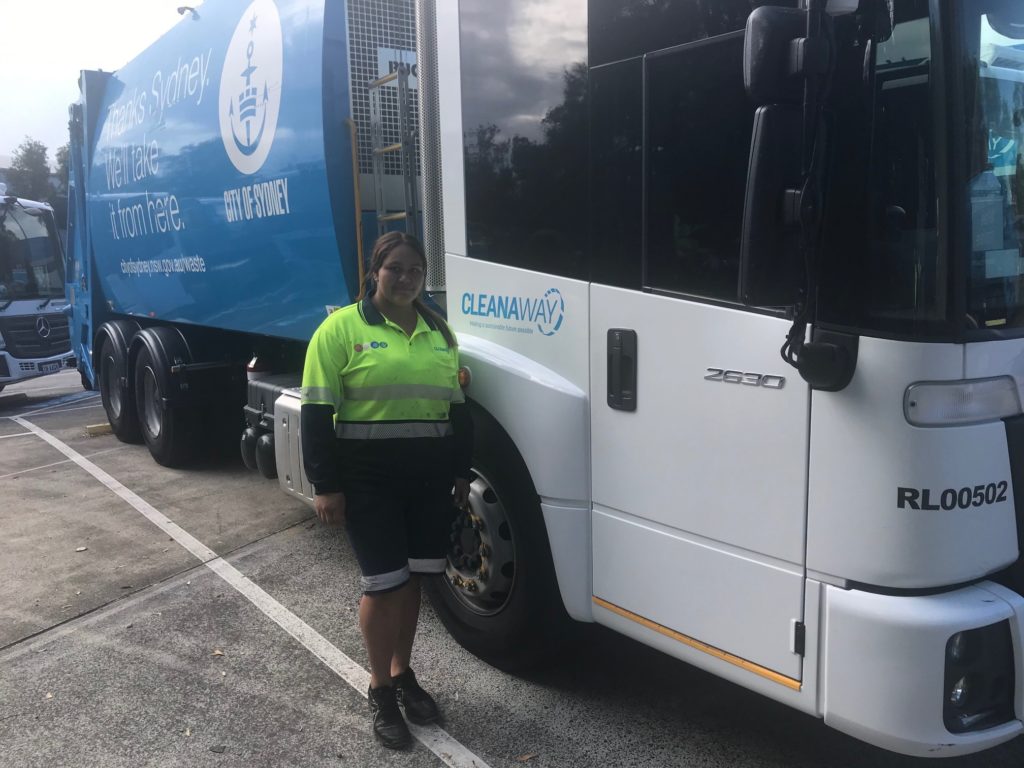 Pictured: Tymekqwa next to her Cleanaway truck servicing the City of Sydney

“Through my whole life growing up, my family was in the garbage industry. My pop was a garbo for about 30 years. So were my aunts and uncles. When I was younger, he took me into work a couple of times. I thought it was pretty cool. It’s rewarding from a financial point of view but it also helps the public and the environment,” she says.

“I like the early starts. You are not working late or at night. I have time for a social life and for training, although I don’t see my friends as much as I used. I’m trying to juggle it all. We leave the yard around 4.30am and start a run around 5am. If it’s an easier day and there’s not as much to do, we clock off at around 2.30pm. But some days can finish as late as 3pm or 3.30pm.

“We go from street to street, walking or jogging, lifting the smaller bins for the first three to four hours before moving to the heavier bins later in the shift.

“Working as a runner, you do get tired. The first couple of weeks was hard with changing sleep patterns. The Roosters helped me out a lot. I didn’t have to do as much work at training.”

She is in her third year with the Roosters’ women’s under 19 ‘Tasha Gale Cup’ rugby league side, playing as a prop, and harbours ambitions to play in first grade, and for her state and country. 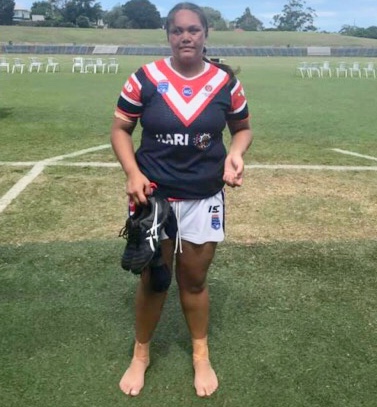 The eldest of five children, all girls, she played rugby league for a few years before switching to netball at age eight, where she made representative teams, before switching back to football as a teenager.

“My dream is to make the NSW and Australian teams,” she declares. 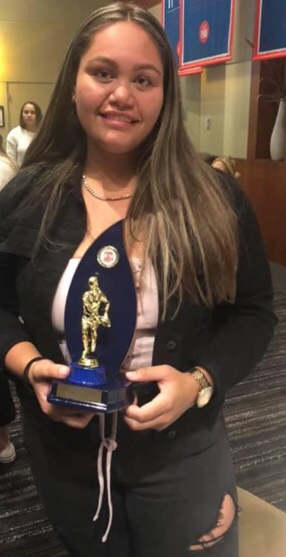 Pictured: Tymekqwa with one of her many footy trophies

While Tymekqwa has aspirations to make it big in her chosen sport, longer term her focus is on building a career.

“Both (work and footy) are important. I’m not going to be able to play footy long term because there’s a certain age you can’t play beyond. That’s why you need a career and a job,” she says.

A rarity as a woman in a male-dominated industry, Tymekqwa has found Cleanaway to be supportive of her efforts to combine work and sport.

“Cleanaway has been very good to me. We have one of the heaviest trucks in the yard because of the loads we collect and if I tell them if my energy levels are not up, they let me swap trucks,” she says.

“They understand what footy is like and were concerned that people get injured. That was the big question they had. I explained I do a recovery and everything I can to prevent injuries.”

Hiring women like Tymekqwa in operational roles reflects our strong focus on gender equality and empowering women and girls, which is a sustainable development goal.

We aim to increase the percentage of females in operations to 6.5 percent this financial year from 5.7 percent.

Asked if other women ask whether they should follow her into the industry, she advises them to ‘give it a go’.

“People tell me it’s a men’s job but women are as good as men,” Tymekqwa says.

Contact us to learn more about the amazing people who are making a sustainable future possible for communities and businesses across Australia.

Back in the driver’s seat: Meet Darryl Durkin

The charmer of St Marys