Cleanaway Driver David Wilkinson inspired a young Jarrad Taylor to follow his footsteps. This is the story of their reunion, 18 years later.

"I remember for many Christmases, he always came to the door with bags of lollies and mini bins and I remember seeing his big old Thiess truck out front behind him."

"I remember for many Christmases, he always came to the door with bags of lollies and mini bins and I remember seeing his big old Thiess truck out front behind him."

The first garbo Jarrad Taylor ever met was Cleanaway Driver David Wilkinson or Dave Wilko for short. Jarrad became very close to Dave growing up and was inspired by him to become a Cleanaway driver himself.

“I remember for many Christmases, Dave would always come to the door with bags of lollies and mini bins and I remember seeing his big old Thiess truck out front behind him,” said Jarrad. “He came in and it was like he was a part of the family. He always had something to give me every time I saw him. He’s just meant so much to me especially with me being autistic.”

Jarrad lost all communication with Dave in recent years and knowing that Dave works at our North Wyong Depot, he asked if Cleanaway could plan a reunion.

“I get a bit sentimental when I think about how I’ve lost touch with Dave for that long and that he has moved depots.” Jarrad explained. “He moved off my suburb run nine years ago and I’ve only seen him from afar on an oddball litter run. He does not know I work for Cleanaway so I figured we could possibly organise a reunion through Cleanaway.”

Dave was called into the North Wyong depot where he currently works to ‘collect a trainee driver’, who turned out to be none other than Jarrad and his mum, Kylie. There were smiles on everyone’s faces when all parties met, and they spent the afternoon reconnecting and reminiscing about old times. 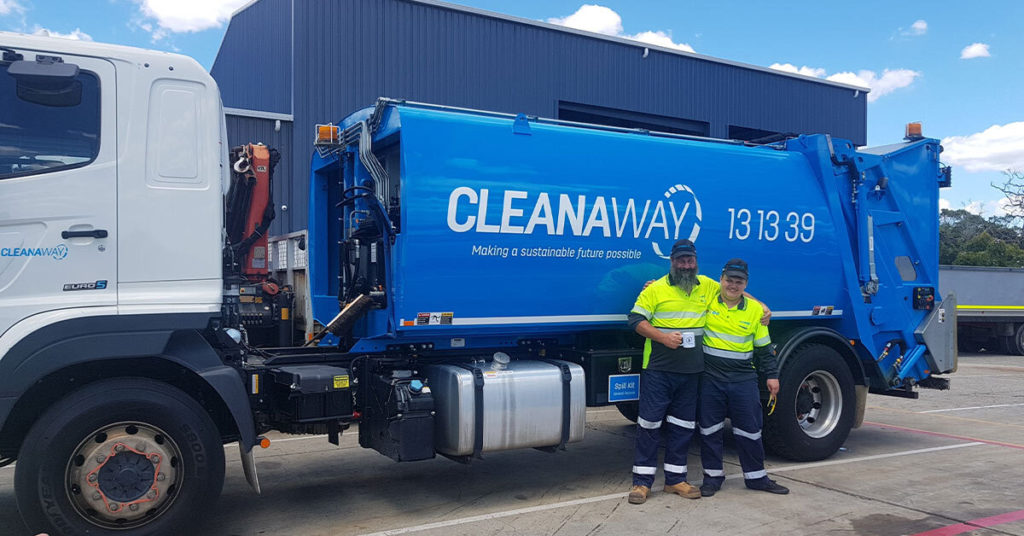 “18 years in the making. The man who inspired a career in the waste industry for me – Dave Wilko. All started when I was a baby and he was my recycle garbo. All started from there, that simple.” said Jarrad after their meeting.

Contact us to learn more about the incredible people who are making a sustainable future possible through a career with Cleanaway.

Royce receives a birthday surprise he will never forget

‘Garbo’ Chelsea turning corners and heads on the street

Andrew makes a trusted role his own