The LTS facility at Charles Street processes soils and muds which have been contaminated by substances including lead, coal tar and asbestos.

The LTS facility at Charles Street processes soils and muds which have been contaminated by substances including lead, coal tar and asbestos.

Cleanaway is playing a key role in an infrastructure boom which is driving building activity in Sydney and dealing with the legacy of the city’s industrial past.

The company’s Liquid and Technical Services (LTS) business is treating hazardous soils and drill muds excavated from transport projects such as light and heavy rail and motorways, and from property development projects.

The soils and muds, which have been contaminated by substances including lead, coal tar and asbestos, are processed at the LTS facility at Charles Street, St Marys to ensure they can be safely disposed of in landfill in accordance with NSW Environment Protection Authority (EPA) regulations.

Cleanaway purchased the facility through the takeover of hazardous waste specialist Toxfree Solutions in 2018 and has upgraded it with $5 million of investments including environmental controls such as an air extraction system, fully enclosed treatment and loading areas, rapid speed roller doors, wheel wash bays and a water treatment plant.

Kivin Rollinson, LTS Business Development Manager SME, said this is one of the major hazardous soil treatment facilities in NSW.

“We are a critical part of delivering the infrastructure pipeline of NSW. We only represent a small part of these projects but, without us, a lot of them wouldn’t be able to go ahead in the same time frame or with the same ease,” he said.

Soil volumes processed at the Charles Street facility are project related and vary year to year but have exceeded 30,000 tonnes per annum over the last four years.

One of the first major contracts for the facility was treating soil from the site of the former Millers Point gas works as part of the development of the Barangaroo urban development project on the edge of Sydney’s central business district.

The gas works, which produced ‘town gas’ from coal, were decommissioned in 1921 but tanks containing coal tar and contaminated soil remained under the site until the project began. 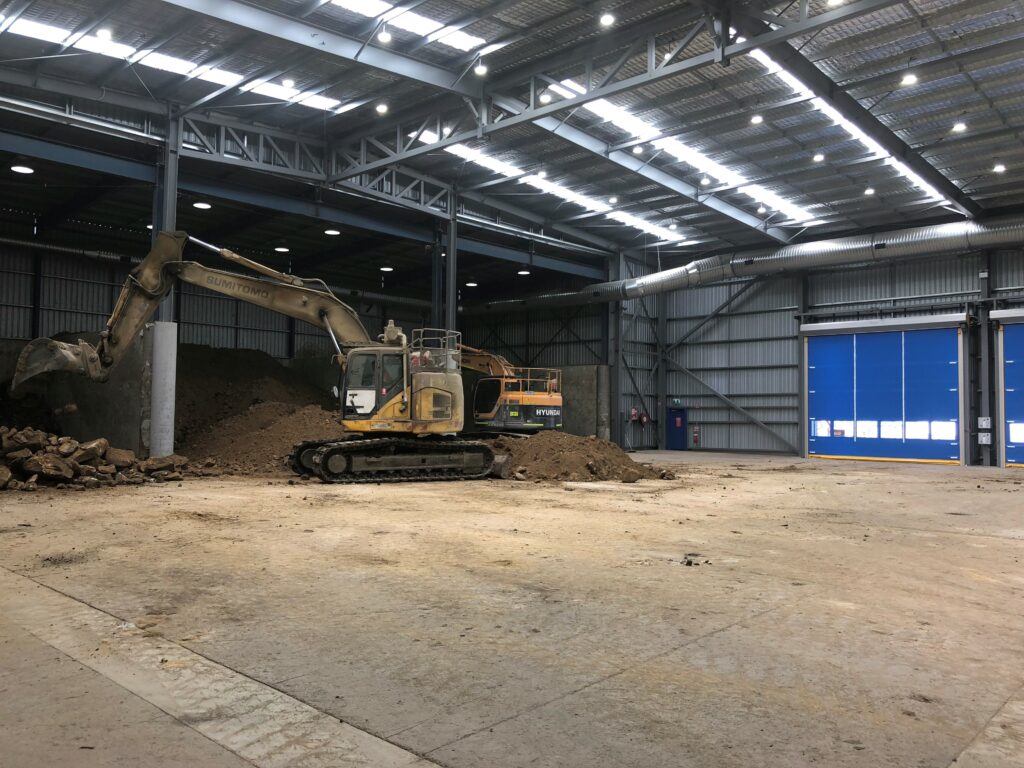 Pictured: The loading area inside Cleanaway’s fully enclosed hazardous soil treatment facility at Charles Street, St Marys in Sydney, where the soil is unloaded by trucks before being transferred to the treatment area. It shows the rapid speed roller doors and air extraction system.

Treatment work at the St Marys facility has continued with soil transported by truck from projects such as Parramatta Light Rail, Sydney Metro, M4 motorway widening, M5 motorway upgrade and other industrial redevelopments.

The soil is treated with reagents using a specialist mixing plant that has been approved by the NSW EPA so it can be disposed of in landfill.

NSW has more than 30,000 contaminated sites that were used for heavy industries such as gasworks or smelters, livestock dip sites, and storage areas for chemicals used in service stations or dry cleaners, according to the NSW EPA.

“It obviously shows there’s more work to be done. We are getting calls from customers all the time to process soil which if left untreated may pollute the environment and damage the water table beneath,” Kivin said.

“Our innovative remediation methods and technical expertise ensure we can meet customers’ and regulatory requirements and deliver on our mission of making a sustainable future possible.

“Our technical and environmental experts can work with customers to tailor solutions to their contaminated soil remediation problems and deliver the best environmental and commercial outcomes.”

Contact us to learn more about our tailored services for all types of waste streams.

How do I dispose of unwanted chemicals from my home?