Closing the loop on food waste

When Lachlan Anderson cooks his favourite beef and vegetable stir fry dish each week, without realising it, he is a key participant in the ‘circular economy’ for food waste.

Among the ingredients in his signature dish are snap peas purchased from the Richies IGA Merbein supermarket in north-west Victoria where he is also the manager of the produce department.

The peas are grown on a farm in nearby Mildura in soil enriched with compost created from food waste collected by Cleanaway from the Sunraysia area.

Lachlan cuts off the ends of the peas and disposes of them in his Food Organics and Garden Organics (FOGO) bin, one of thousands collected from homes like Lachlan’s in this region. 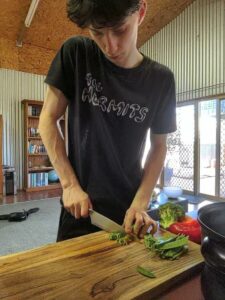 Pictured: Pea tips are cut off to be disposed of in the FOGO bin

“Being a produce man, I am all about minimising waste and putting everything to use,” he says after learning that what he throws out is reused as part of closed loop.

“If it’s going to go back into the ground that grows my veges, I’m all for it.”

Cleanaway collects the 240 litre lidded FOGO bins with green lids from about 26,000 households in the Mildura Rural City Council area each week, supplementing the general waste and recycling bins. 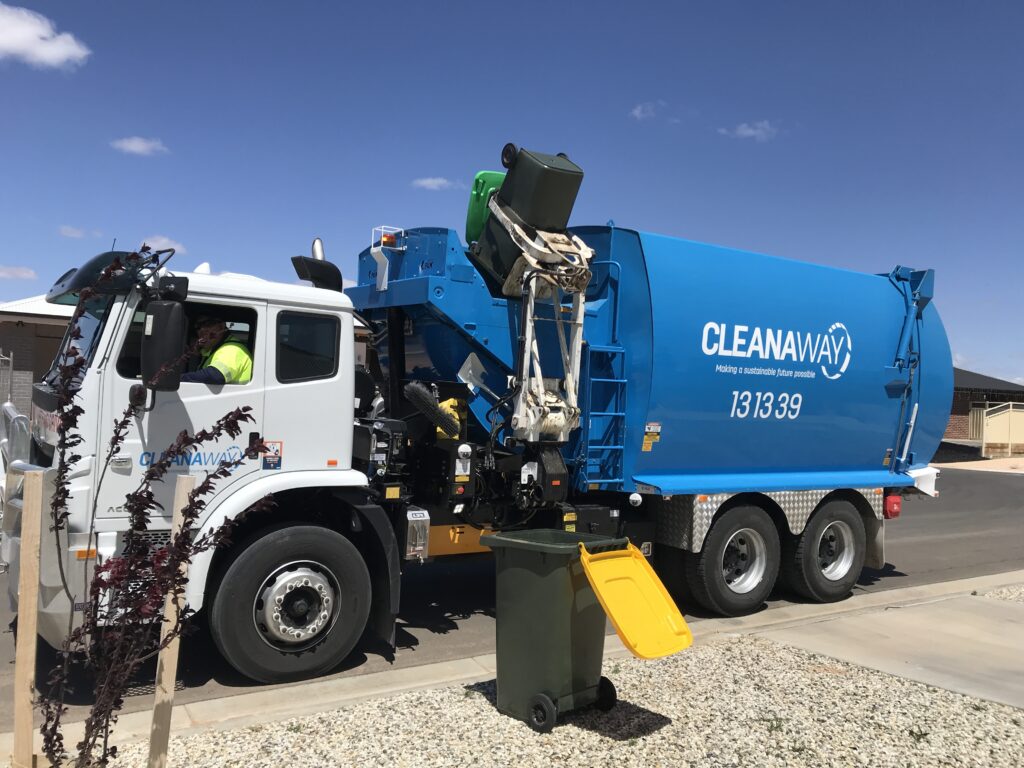 Pictured: A Cleanaway truck collecting a FOGO bin in Mildura

The Council introduced the third kerbside bin to divert organic material from landfill, where it breaks down, creates greenhouse gas emissions, and contributes to climate change.

For the last two years Cleanaway has provided about 11,000 tonnes a year of food waste to Worm Tech, a company based about 300 kilometres west of Mildura at Carrathool in the Riverina region of NSW, which uses it to create high grade compost and worm castings.

“This is a real-life demonstration of the circular economy in action, and we are proud to play our role,” says Paul Timmis, Manager of Cleanaway’s Mildura branch.

“We see all waste as a resource and are sharply focussed on ensuring it is reduced, reused and recycled as we continue to pursue our mission of making a sustainable future possible.” 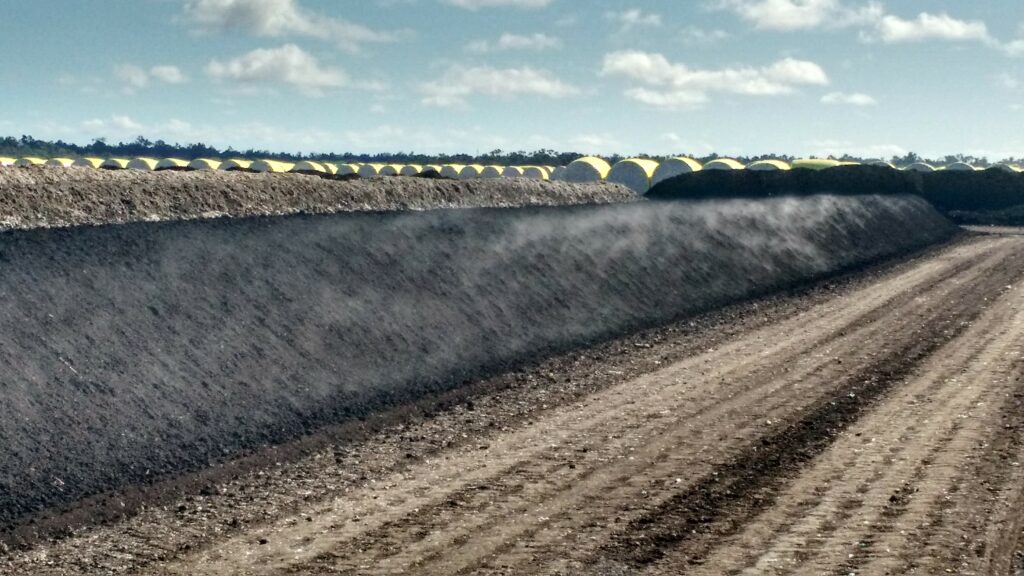 Worm Tech shreds and decontaminates the FOGO before mixing it with other waste and laying it outside in ‘wind rows’ which are 350 metres long, 4.5 metres wide and two metres high to begin the six-to-eight week composting process.

“It’s a natural process but we enhance nature by adding water, monitoring the moisture and temperature, and turning it,” says Worm Tech Founder and Managing Director Adrian Raccanello.

Worm Tech’s customers include farmers like Craig Crouch, a Director of Ausco Fresh Produce, which owns five farms covering 80 hectares at Mildura where he grows snap peas, snow peas and broccoli which are sold at the Melbourne and Sydney markets.

“I use a lot of their compost as pre-plant fertiliser for our veges. They build soil health and improve the biology of the soil. We used to use a lot of synthetic salt-based fertiliser but that’s detrimental to soil health,” says Craig, whose family has been farming in Mildura for 60 years.

“My farm practices have turned more to soil health these days. By adding organics to the system, it’s good for biology. That enhances the health of your soil and plants and can enhance the health of humans.”

Craig sells about five tonnes of produce each week in two 10-week cycles covering Spring and Autumn at the Melbourne Market. Among the purchasers of the snap peas is Rainfresh Victoria Pty Ltd, which buys on behalf some IGA supermarkets and fruit and vegetable stores, including Richies IGA Merbein, where Lachlan works. 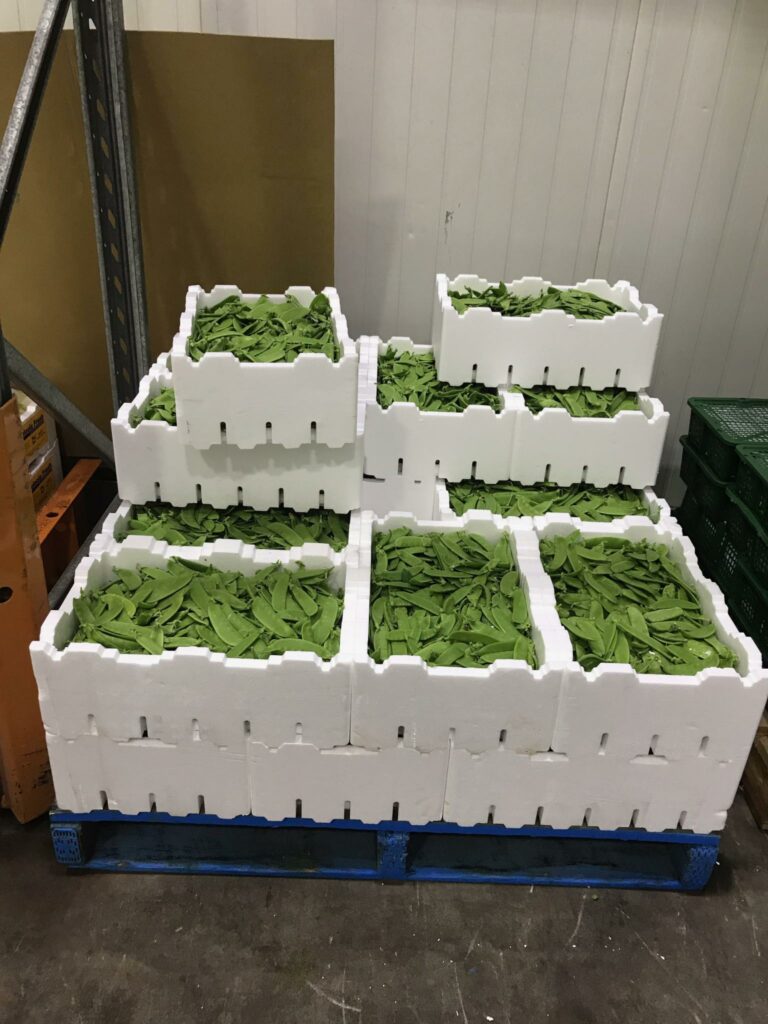 Pictured: Fresh peas for sale at the Melbourne Market

“I buy snow peas and snap peas at the Melbourne Market. They go to our warehouse opposite the market where they are picked and packed for customers,” says Rainfresh buyer Darren Syres.

Lachlan estimates the supermarket receives about three to four kilograms of snow peas and six punnets of snap peas per week.

When he buys snap peas for his weekly stir fry, he is closing the loop on waste again.

Want to learn more about FOGO ahead of the nationwide rollout in 2023? Access our FOGO resources here.

Your sink is not a rubbish bin