Everybody who participated had the satisfaction of removing a full skip bin of rubbish from the bush and at the end of it we said ‘cheers’ to the fact we are keeping camping sites clean and open for future generations.

Everybody who participated had the satisfaction of removing a full skip bin of rubbish from the bush and at the end of it we said ‘cheers’ to the fact we are keeping camping sites clean and open for future generations.

A territory manager with a large social media following has organised a clean-up of camping grounds in south-west Western Australia with the assistance of a skip bin donated by Cleanaway.

About 800 kilograms of rubbish was removed from sites in the bush around Wellington Dam near Bunbury on Sunday 25 April.
The project was the brainchild of Picton Bunbury Territory Manager Brayden Cresswell, who was fed up with seeing his favourite camping spots covered in litter.

“A few friends and I were chatting around a campfire about how camping had changed, and with COVID it had become more popular. We’ve found that much more rubbish is out and about, but nobody is doing much about it, so we thought ‘what can we do?’,” Brayden says.

“Working at Cleanaway, our mission is making a sustainable future possible, so I spoke to my manager and said, ‘this is what I want to do’. Although I am doing it in my private time, I also work for Cleanaway, so how can we link the two together?”
Brayden promoted it on social media including Instagram and YouTube, where he has his channel devoted to four-wheel-driving (4WD) and camping.

He was joined by about 25 volunteers who donned sunscreen, hats, glasses, gloves, long pants and heavy boots to tackle the task in warm conditions. 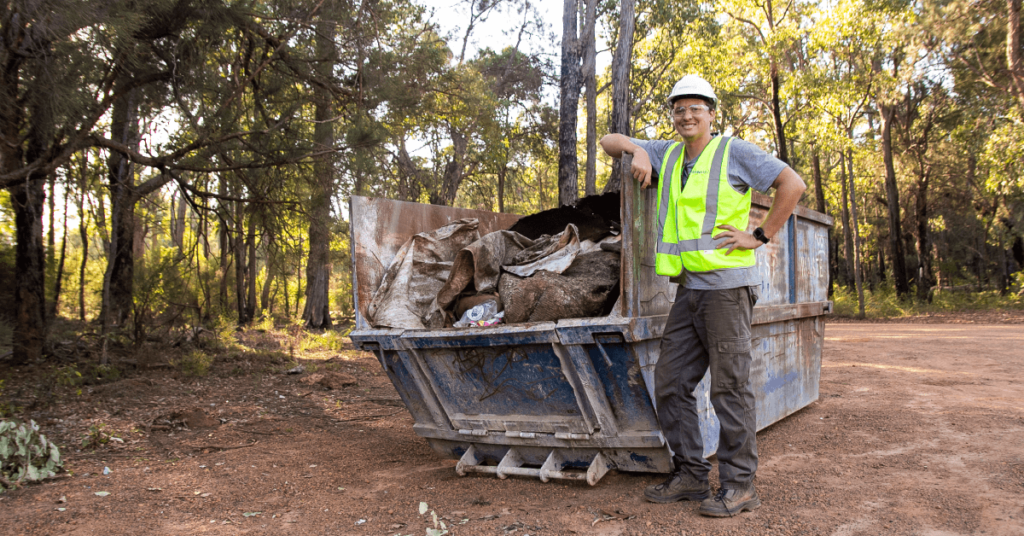 Pictured: Brayden with a skip bin used in the clean up efforts

Bunbury Depot Branch Manager James Wilson approved the donation of a skip bin for the job, which involved moving from site to site, loading rubbish onto trailers and dropping it off at the skip, which was later picked up and transported to our Dardanup landfill near Bunbury.

The volunteers found car parts, carpet, tin, linoleum, camping chairs and inflatable mattresses as they made their way around the lake.

Cans and plastic bottles were also collected and donated to a charity to raise money.

“The big thing is how the rubbish around camping grounds has changed in the last 12 months. Previously we mainly found bottles around camp sites. With the influx of weekend campers, the rubbish has changed and increased. It comes down to a lack of care and respect because anybody who is into camping knows that you clean up after yourself,” Brayden says.

“Everybody who participated had the satisfaction of removing a full skip bin of rubbish from the bush and at the end of it we had a few beers and said ‘cheers’ to the fact we are keeping camping sites clean and open for future generations.”

Brayden has released more than 100 videos on his 4X4 Camping and Adventures channel.

Contact us to learn more about the amazing people who are making a sustainable future possible with Cleanaway.