"There were so many schools at The Wave and it was incredible to see how much Tangalooma EcoMarines has grown. I love that Cleanaway is able to support them through this journey – they’re making such an impact,”

"There were so many schools at The Wave and it was incredible to see how much Tangalooma EcoMarines has grown. I love that Cleanaway is able to support them through this journey – they’re making such an impact,”

‘Waste Warrior Jellyfish’ made by students of St Paul’s School in Bald Hills, Queensland, has won the Cleanaway Waste Warrior Challenge, an annual art competition where students from different schools compete to create meaningful artwork from waste items found in their local communities.

The luminous beauty beat entries from eight other schools, and highlighted the dangers of hard and soft plastics to marine life. 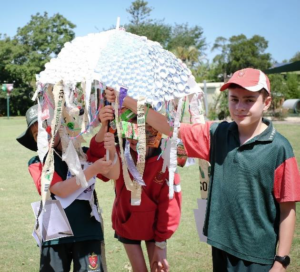 The students were aided in their winning project by marine biologist Caitlin Smith, who also happens to be a past student of St Paul’s. Caitlin lent a hand by providing photos of the insides of a sea turtle’s intestines, which revealed the extent of plastics pollution in the ocean. Caitlin even went as far as detailing every piece of hard and soft plastic found inside the sea turtle – something the students found both incredibly interesting and devastating. 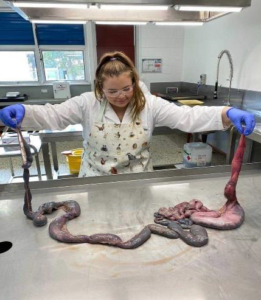 Pictured: Marine biologist Caitlin Smith with the intestines of a sea turtle found off Hervey Bay. 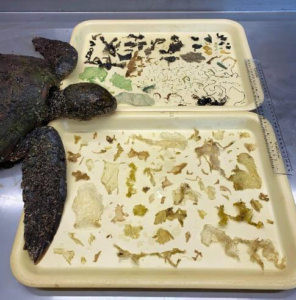 Pictured: The tally of hard and soft plastics found inside the sea turtle.

Spurred by their recent experience, the St Paul’s EcoMarines went to work on ‘Waste Warrior Jellyfish’ by collecting a week’s worth of hard and soft plastics at their school via dedicated bins and posters. These plastics then became the building material for their artwork, which is scheduled to be turned into an installation in the St Paul’s library for the benefit of the school community.

“The biggest difference I observed compared to last year’s event was definitely the increase in the number of students! There were so many schools at The Wave and it was incredible to see how much Tangalooma EcoMarines has grown. I love that Cleanaway is able to support them through this journey – they’re making such an impact,” said Lauren.

“I was so impressed with the students and their commitment towards the EcoMarines program. It was wonderful to see so many of them stepping up to make a positive impact on the environment while encouraging their school and community to do the same,” said Chloe, who attended The Wave for the first time this year. 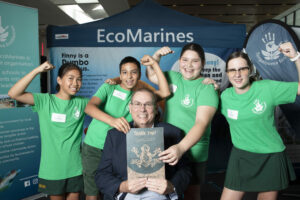 Cleanaway is proud to support Tangalooma EcoMarines, a not-for-profit organisation based in Brisbane that provides sustainability programs for schools across Southeast Queensland. 63 primary schools and 15 secondary schools participated in the EcoMarines program in 2021.

Cleanaway has been a sponsor of the EcoMarines program since 2017.