My time in the army - Chris Reed

Meet Chris Reed, one of the many veterans working at Cleanaway who have served for Australia.

Chris' Anzac Day message to all Australians? "Its okay to ask for help."

Chris' Anzac Day message to all Australians? "Its okay to ask for help."

Health & Safety Business Partner Chris Reed served as an air dispatcher in the army having worked at the Royal Australian Airforce (RAAF) base in Richmond, NSW, in the early 2000’s. Chris also served as an HR driver, driver trainer and private crew commander while being a qualified parachutist.

“The events of 9/11 prompted me to enlist. My first day at Kapooka was September 11th 2002 – I was in for 5 years.” says Chris of his motivation to serve the country.

Kapooka is a suburb in the southwest of Wagga Wagga, NSW and is home to the Department of Defence’s Blamey Barracks from where the Army Recruit Training Centre conducts its operations.

Recruits are taught the fundamental skills to become a soldier such as weapon handling and shooting, first aid, communications, navigation, living in the field and much more. 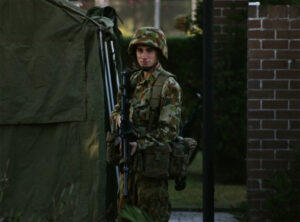 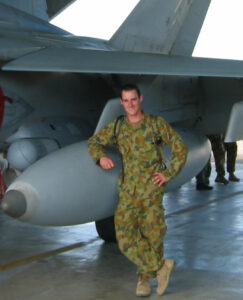 Pictured: Chris standing next to a military aircraft 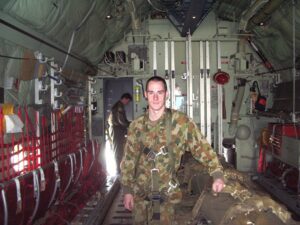 Pictured: This is Chris in 2005 as an air dispatcher in the Army. “I am in the cargo area of a C130 Hercules bound for a remote drop zone in central NSW”

When asked about some of his more memorable experiences he’s had in the army, Chris names jumping out of perfectly good aircrafts, rigging up and dropping a dozer/backhoe out of a C130 and hooking up loads under defence helicopters as his top three picks.

Pictured: Chris and team rigging up and dropping a dozer out of an aircraft. 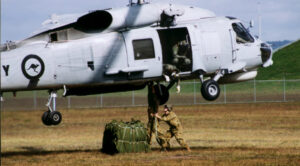 Pictured: Chris hooking up a load to a defence helicopter.

Five years ago, Chris needed a change from the civil construction industry and his search led him to a role in Cleanaway. “As Health & Safety Business Partner I have been helping set up our Industrial & Waste Services branches for success in upcoming audits. My experience in the army gave me an invaluable tool in my current role – the confidence to say I can.”

When asked about his motto for life and what keeps him going, Chris replies quickly – “Explore.”

Outside of work, Chris spends his time camping, fossicking and taking photos. His photography skills are evident in these amazing pictures Chris shared about his time in service.

Chris’ Anzac Day message to all Australians? “Its okay to ask for help.”

Pictured: A stunning picture by Chris of a helicopter carrying a load. 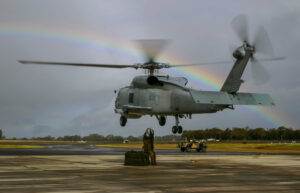 Pictured: Chris’ keen eye for photography in action – rigging up a load against the background of a beautiful rainbow.

Contact us to learn more about the amazing people making a sustainable future possible together with Cleanaway.

ANZAC Day spotlight: The value of resilience in challenging times

David Mccarron: My time in the army

Sailing the high seas from Singapore to Cleanaway

A leader is a dealer in hope: A conversation with Vik Bansal