Learn about how a bin tagging program helps reduce contamination by providing immediate feedback if the wrong items are spotted in the recycling bin.

Australians are conscientious recyclers but many councils still report high levels of contamination in kerbside recycling bins. Insights from our customers tell us that this is mainly due to lack of understanding over what goes into each bin rather than lack of care.

Contamination happens when the wrong items are put in a particular bin. This causes problems during the sorting process and reduces the quality of good recycling.

Bin tagging programs have proven to be an effective way to reduce contamination in recycling by providing on-the-spot feedback about the contents of a recycling bin. The tag on the bin indicates if contamination has been identified and explains why the bin has not been emptied. Common contaminants in the commingled recycling bin include food, liquids, soft plastic and textiles.

While tagging programs differ across councils, a typical system would involve inspectors visually assessing the bin for:

If a bin is severely contaminated, it will not be collected as contamination could spoil an entire truckload of otherwise good recycling. Conversely, if the contents of a bin are on point, the bin may be tagged with positive feedback through a congratulatory bin tag. 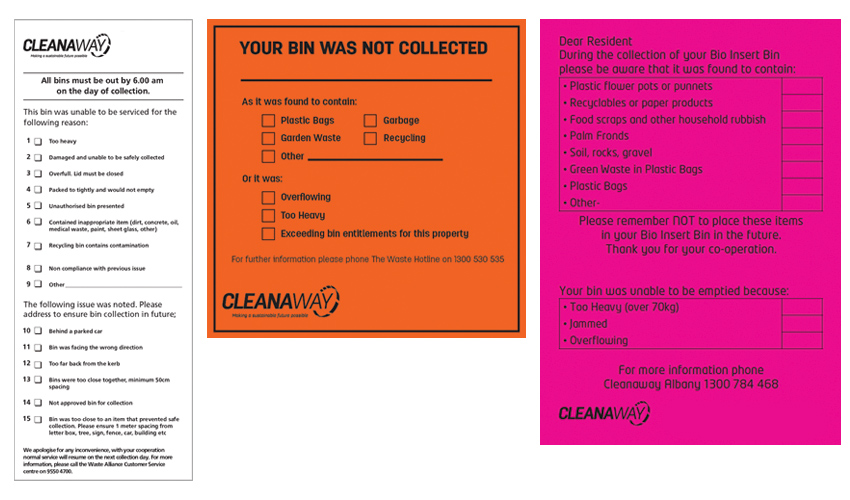 An essential element of a bin tagging program is enforcement. After a certain number of inspections, consistently contaminated recycling bins may be taped shut and not collected. While this step is rarely needed, it is a clear and tangible repercussion of not using the recycling service correctly.

Less than a year after Cleanaway’s bin tagging program started in the Central Coast, contamination dropped from one in four bins to one in ten – a more than 100% improvement in the community’s recycling rates. 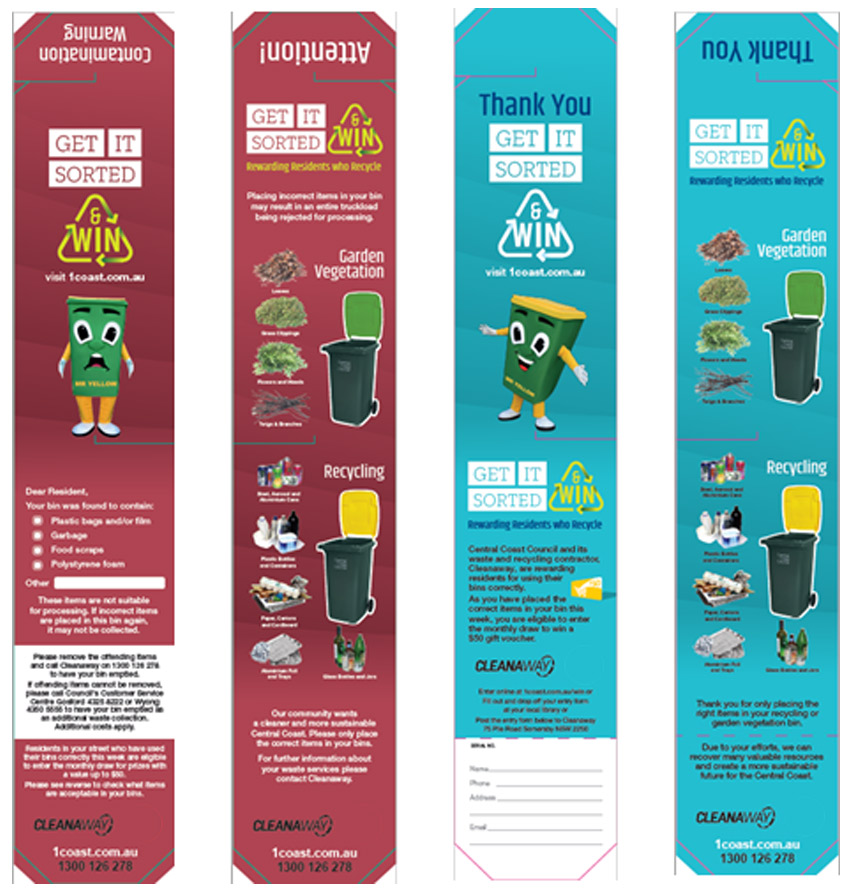 Similarly, trials in South Australia and Western Australia have also reported up to a 48% decrease in contamination through bin tagging programs.

Bin tagging has been a successful way to improve recycling behaviours because:

What you can do to avoid a bin tag

We encourage people to follow the three golden rules of recycling:

Every council has different rules for recycling, so it’s best to stay on top of the practice in your local area by visiting your council’s website.

*Check with your council for local inclusions

If you are ever in doubt about what goes into your kerbside bin, contact your local council.

Are you ready to become a Recycling 'Greenius'?

Study shows we think we’re wheelie good recyclers, but most of us are rubbish